The good thing is that most companies and pioneers share their formulas. Some of these can be copied, others need tweaking to fit but it is quite fascinating that whilst the innovations themselves may hide the “secret sauce”, the “how” is often openly shared.  So why is it so god darn hard for the rest to innovate if these pioneers are so openly sharing? Well there are many reasons and perhaps there are no silver bullets but there is one I’m beginning to believe that we need and no successful company has managed to achieve their accomplishments without and that is the “Innovation Linebacker” 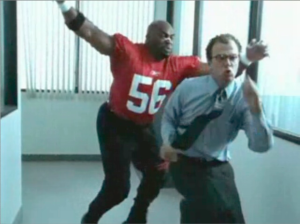 The designation should not be confused with the CIO (Chief Innovation Officer) or any innovation title, senior or creative in origin. This is not about titles its about attitude and intent – its about fame and legacy – its about kicking ass to be successful at innovation.  I’ve met faux or cosmetic CIO’s, they are a tick box and mainly a mouthpiece to placate owners/shareholders. They do not look or act in any way shape or form as an Innovation Linebacker. Innovation Linebackers are people of principle and action.  They have real goals and targets, which they share and achieve. They do not conform to the politics of not rocking the boat or the inertia of a lethargic company culture; they strive to realise its potential, inspire and drive its ambition. They pull people together and create high performing innovation teams. They build and drive the innovation engine and tackle head-on those who are not on-board and want an easy corporate life.

But do Innovation Line-Bakers need to be the CIO? I have met Innovation Linebackers in lower positions but they are limited in being successful within their area. However their fate is predictable; if they are not promoted to be the CIO or look to recruit a CIO as part of their plan their lot becomes one of frustration and realisation of what could be as they are unable to transfer their success and vision to the wider company and they remain in their areas or breakout by transferring to a company with bigger innovation ambitions or leave to coach future Innovation Linebackers.

So if a company stands any chance of being successful at leveraging innovation as a formulae for corporate-wide growth then the Innovation Linebacker needs to be the CIO, anyone less and politics takes over – and politics trumps strategy. It is important to also note that the CEO equally needs to be a driver or they too could politically trump the CIO. We have all seen it in our favourite football teams when the manager falls out with the captain, and a once winning team looses form.

So where do we find these Innovation Linebackers? Where are these CIO’s with the body armour to whip companies with ambitions of growth driven by innovation? There are two main sources. Firstly, they already exist within these companies. If they are not already doing this role within a part of the company they have probably led the transformation of one or more areas successfully and have a reputation of not only being a deliver of timely results but someone who understands the bigger picture. They have all the right ingredients to be the CIO, plus they have the added advantage of already understanding the business intimately. The alternative source of course is to hire those who have already undertaken that role elsewhere. They can bring a ready-made Innovation Playbook but it will need adjusting to the new company.

And if you think I have done the analogy to death there’s one more thing to consider. Top Innovation Linebackers are now commanding huge “transfer fees”. Look at all the recent movement from some of the most admired innovative companies, who’s fame and results has been built on innovation such as Marissa Mayer. This is a huge signal that innovation is a key growth driver. It’s no longer a nice to have; it’s not something to tinker with at the edges. For it to be successful and drive growth it has to be at the core and supported unequivocally at the C-level. Companies want this so bad they are now hiring the best Innovation Linebackers and promoting their internal “hotshots” to join the C-Suite.

So welcome to a new innovation game and bring your body armour with you – things are going to get rough as these Innovation Linebackers, like Terry Tate below, tackle corporate inertia and turn their teams into successful innovators who disrupt competitors and drive new revenue streams of growth.

This site uses Akismet to reduce spam. Learn how your comment data is processed.

Matt is a Director of Professional Services at Planview. However mattchapmanblog.com is written by Matt Chapman, not Planview so the views expressed in this blog are his and not necessarily those of his employer. All written material on this site is copyright Matt Chapman, but may be reproduced with appropriate attribution and acknowledgement. All care but no responsibility is taken for errors and omissions.